While THE ASTONISHING TIMES OF TIMOTHY CRATCHIT isn’t without its flaws, it is a show with immense promise

Ever wondered whatever became of Tiny Tim after the events of A CHRISTMAS CAROL? Hope Mill Theatre answers this very question with their latest production of THE ASTONISHING TIMES OF TIMOTHY CRATCHIT, a Victorian sequel to the Charles Dickens’ classic.

Set almost a decade after the events of A CHRISTMAS CAROL, THE ASTONISHING TIMES OF TIMOTHY CRATCHIT follows 16-year-old Timothy Cratchit (Ryan Kopel) who leaves the home of his benefactor, Ebenezer Scrooge (Paul Greenwood), in order to find his place in the world.

Young, ambitious and naïve, Tim sets out on his bold adventure, meeting many weird and wonderful characters along the way, including the magnificent stage clown, Giuseppe Grimaldi (Michael Matus) and his troupe of lively performers, who help Tim to discover his true identity.

From the synopsis alone, it’s easy to see why THE ASTONISHING TIMES OF TIMOTHY CRATCHIT appealed to the team at Aria Entertainment and Hope Mill Theatre. Since their opening in 2015, the award-winning venue has gained somewhat of a reputation for putting on bold and ambitious new musicals and THE ASTONISHING TIMES OF TIMOTHY CRATCHIT is no exception. 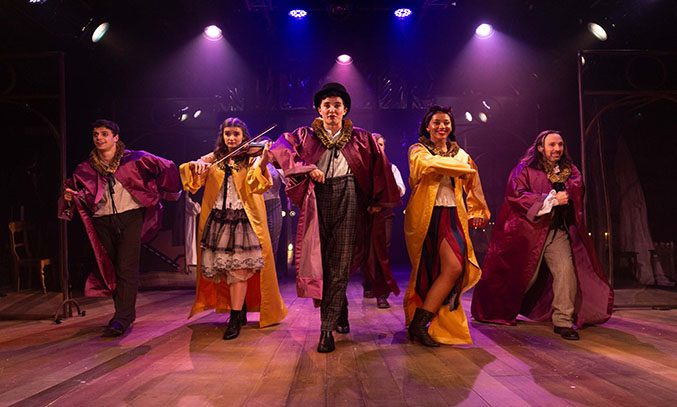 Ryan Kopel and the Cast of THE ASTONISHING TIMES OF TIMOTHY CRATCHIT. Photo Credit: Phil Tragen

For the most part, writer Allan Knee does an impressive job bridging the gap between two of Dickens’ most famous works – A CHRISTMAS CAROL and MEMOIRS OF JOSEPH GRIMALDI – delivering a sweet and original coming-of-age tale that’s inventive, humorous and magical.

Jonathan O’Boyle also directs the piece with style and flair, making good use of Hope Mill Theatre’s intimate space thanks to Gregor Donnelly’s set of revolving mirrors and Aaron J Dootson’s effective lighting design, allowing the action to open out for bigger scenes but also close in for the more intimate moments.

Shame then that THE ASTONISHING TIMES OF TIMOTHY CRATCHIT doesn’t really come to life until the second half. While the first act is enjoyable, it offers little in the way of story development, almost all of the action taking place in the second half, from Tim falling in love with Lucy and finding a passion for clowning, to trying to heal his damaged relationship with his uncle. 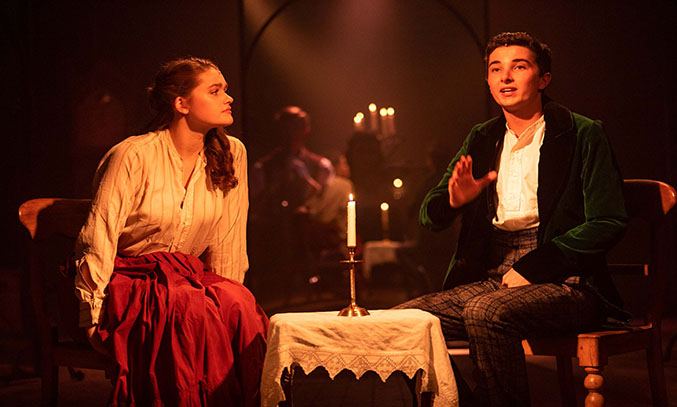 There is also a feeling that many of the characters have very little in common, Timothy’s world and Grimaldi’s world feeling miles apart, ultimately leading to a feeling of disparity and limiting the development of almost every character except for Timothy.

That said, the magnificent cast help pull this lively musical through, many performing multiple roles as well as musical instruments on stage.

Michael Matus is a delight as the humorous and melodramatic clown Grimaldi, his presence bringing a sense of mysticism and wonderment to the production while Paul Greenwood is equally excellent in the role of Scrooge, the father-son scenes between him and Timothy standing out as a highlight.

But the real star of the show is undoubtedly Ryan Kopel who delivers a heartfelt and convincing performance as the naïve young hero Timothy, his physical awkwardness and inspiring sense of optimism making him instantly likeable as a character.

While THE ASTONISHING TIMES OF TIMOTHY CRATCHIT isn’t without its flaws, this is a show which has immense promise. It makes a refreshing change to see something new and original amongst all the pantos and big Christmas productions and with a few strategic changes here and there, it certainly has the potential to stand out.

Let’s face it, if anyone can make it work, it’s sure to be the team at Hope Mill Theatre.