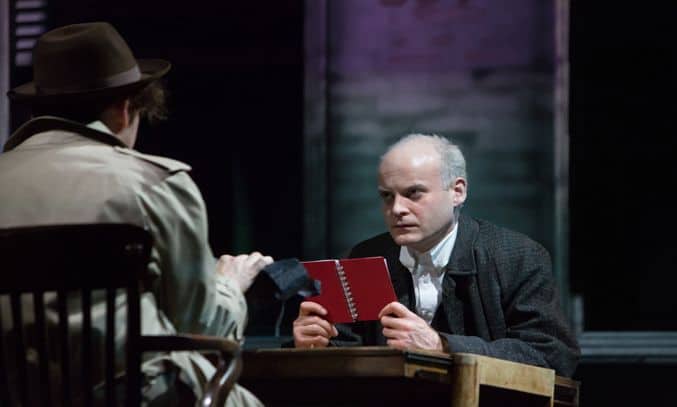 Jack Tarlton as Stillman in Paul Auster’s CITY OF GLASS by 59 Productions. Photo by Jonathan Keenan

CITY OF GLASS is a bold, ambitious and high-tech piece of theatre which captures the crazy and claustrophobic nature of Auster’s original novella

If you’ve ever read Paul Auster’s CITY OF GLASS, you’d be forgiven for thinking that this multi-layered, metafictional mystery is too tricky to make the transition to the stage. The elaborate and complex novella goes beyond the conventional notions of character and plot to challenge the way we see literature and authorship, identity and reality and even the power of language. Yet 59 Productions prove once again that the seemingly impossible is more than achievable, as they bring Auster’s seminal American novel vividly to life in a dazzlingly original stage adaptation.

Based on the first novel in the 1985 THE NEW YORK TRILOGY, CITY OF GLASS tells the story of reclusive crime writer Daniel Quinn who receives a mysterious phone call in the middle of the night from a caller seeking a private detective. Quinn quickly and unwittingly becomes the protagonist in a thriller of his own, as he falls under the spell of a strange and seductive woman called Virginia, who engages him to protect her and her husband from his sociopath father. As Quinn goes deeper into the investigation, he loses track of both his client and the suspect, as well as his own apartment, his belongings, and eventually, his grip on reality. Will Quinn be drawn deeper into the abyss, or could the quest provide the purpose and meaning he needs to rebuild his shattered life?

Adapted for stage for the first time by award-winning writer Duncan Macmillan, 59 Productions’ adaption of CITY OF GLASS is a bold, ambitious and high-tech piece of theatre which captures the crazy and claustrophobic nature of Auster’s original novella. The innovative production cleverly uses stagecraft, projection, magic and illusion to bring the complex metafictional mystery to life, combining dark humour with Hitchcock-like suspense. 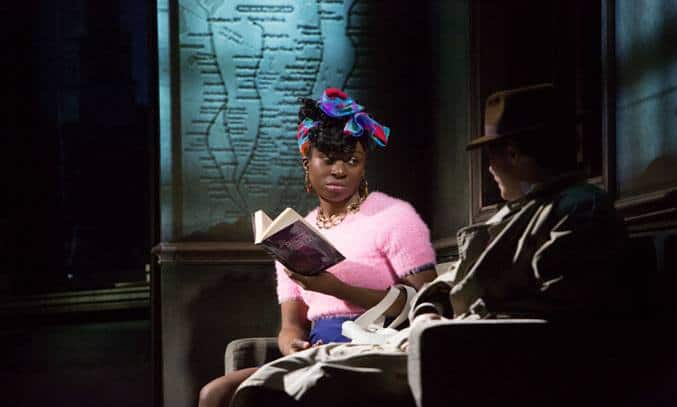 What makes 59 Productions’ adaptation of CITY OF GLASS so special is the way in which it uses technology and design, as well as text and performance to show the descent of a writer. The design is inspired by a graphic novel by David Mazzucchelli and Paul Karasik, and thoughts, scenes and ideas are projected ono the walls with hallucinatory clarity. The result is an immersive piece of theatre which sends the audience into the dizzying, disorientating and ultimately transcendental story as the familiar detective genre starts to give way to something altogether more disturbing.

The short potboiler full of doublings and disappearances is performed by a small but talented cast of five. Mark Edel-Hunt and Chris New impress, both as the writer Daniel Quinn and two the Paul Austers, delivering a complex, multi-layered performance. Vivienne Acheampong equally impresses as the seductive Virginia, although her time on stage is short. But is arguably Jack Tarlton who steals the show as the two Peter Stillman characters, his performance as the younger Stillman in particular standing out as the character seemingly drifts in and out of madness.

While CITY OF GLASS is essentially a detective novel, the real mystery is one of confused character identity and the descent of a writer into a labyrinth in which fact and fiction become increasingly difficult to separate. As such, this is a complex piece that requires your full attention and despite only being one hour 35 mins long (with no interval), this is an intense watch.

That said, you can’t fault 59 Productions’ for their creativity and ambition and this is a bold piece of theatre that despite its difficult and complex discussions, is full of suspense and action.

CITY OF GLASS makes its world premiere at HOME, Manchester until 18 March before moving to the Lyric Hammersmith in London from 20 April to 13 May 2017.