It’s fair to say that Sarah Frankcom’s tenure at the Royal Exchange has been a success. In the past five years, the Artistic Director has created some of the Exchange’s most defining pieces of theatre, championing new writing and exploring classic texts in new and radical ways. Fitting then that the Artistic Director opens her final season at the Royal Exchange with a contemporary version of MACBETH directed by Christopher Haydon and starring Lucy Ellinson in the title role.

Widely considered to be William Shakespeare’s most popular play, MACBETH tells the story of a brave Scottish general who receives a prophecy from a trio of witches that one day she will become Queen of Scotland. Consumed by ambition and spurred to action by her wife, Macbeth murders Queen Duncan to take the Scottish throne for herself, her individual aspiration eventually spiralling out of control with violent, bloody and devastating consequences for all.

Shifting the action from 10th-century Scotland to 21st-century Britain, Haydon’s contemporary version of MACBETH sees Shakespeare’s tragedy redefined, reimagined and reframed. By casting women in the roles of power, Haydon adds a new dimension to this otherwise male-dominated story, Alexandra Mathie, in particular, bringing warmth to Queen Duncan to make her eventual death seem all the more impactful and devastating.

In the title role, Ellinson’s portrayal of Macbeth is nuanced and edgy, the actress appearing physically strong as she struts around the stage in her combat cargo trousers and military-style assault vest, yet, also humanly frail when she needs to be. The scene in which she sees Banquo’s ghost is arguably the highlight of the production, Ellinson’s performance and Oli Townsend’s set combining to give this scene the presence, power and impact it needs to truly stand out. 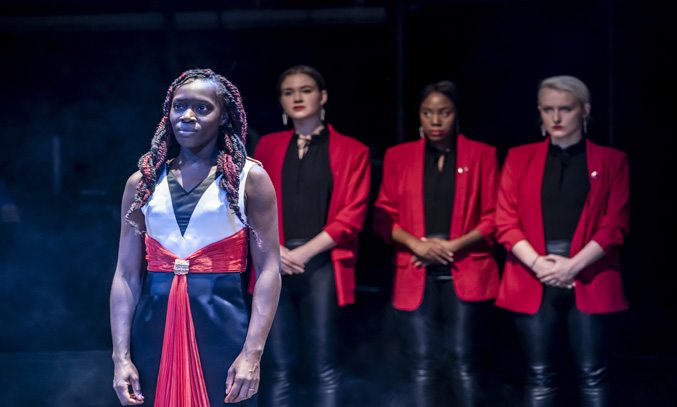 Shame then that the same can’t be said for the rest of this production which just seems to lack intensity. Don’t get me wrong, this is an action-packed piece with Townsend’s military-style costume design and Colin Grenfell’s atmospheric lighting design accentuating the constant threat of death. But, as an audience, we are never really pulled into the unsettling world of Macbeth, her overwhelming desire and lust for power feeling rather lost than all-consuming. Even the relationship between Macbeth and Lady Macbeth (played excellently by Ony Uhiara) loses some of its power here.

That said, the contemporary relevance of Shakespeare’s story and power of his language still has the ability to move us, the play offering a stark reminder of the consequences of when we decide to act upon our deepest and darkest ambitions. The in-the-round setting of the Royal Exchange also goes some way to helping immerse the audience in this dark and dangerous world.

MACBETH runs at the Royal Exchange Theatre, Manchester until 19 October 2019.