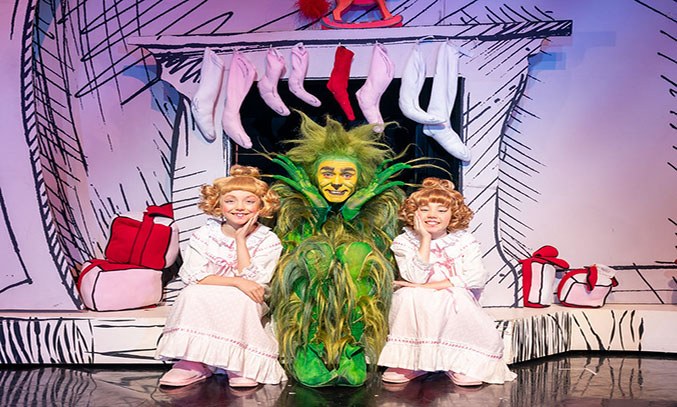 Despite its repetitive score, this musical production of HOW THE GRINCH STOLE CHRISTMAS is as pretty as a picture

The wet weather, a football match and a general election didn’t stop the residents of Manchester and Salford from getting in the festive mood as they headed to The Lowry for HOW THE GRINCH STOLE CHRISTMAS the musical.

Based on the beloved Dr Seuss tale, HOW THE GRINCH STOLE CHRISTMAS follows the mean-spirited and scheming Grinch who lives just north of the whimsical town of Whoville with his pet dog Max. Realising how important Christmas is to the town, he plans to ruin Whoville’s Christmas celebration by stealing all the town’s decorations, gifts and food. But a chance meeting with little Cindy Lou Who spoils the Grinch’s plans and he soon discovers there’s more to Christmas than he bargained for.

Staying true to the original book, this musical production of THE GRINCH is as pretty as a picture. John Lee Beatty’s set design beautifully captures the art style of Seuss’ illustrations with its sketchy, cartoon-like flats of the buildings, scenery and props. Robert Morgan’s colourful costume design is equally stunning, the big, hairy, green and creepily long-fingered costume of The Grinch standing out against the 3D body shapes and candy-cane colours of the twee Whos. 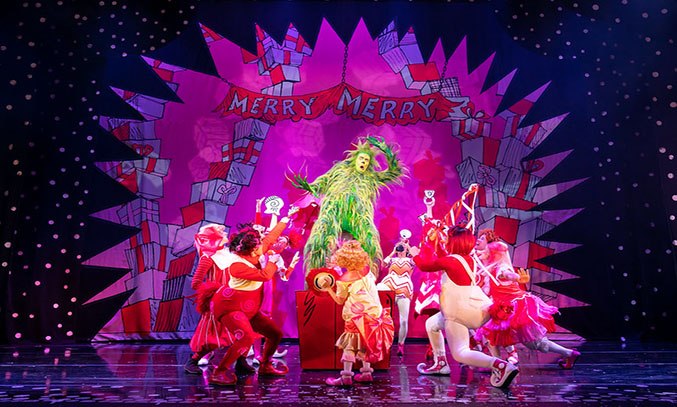 The large ensemble cast deliver a strong performance, with Edward Baker-Duly capturing more than a little of Jim Carrey in his interpretation of the Grinch. His funny facial expressions, quippy one-liners and great comedic timing delivers the best of the laughs, as he slinks about the stage balancing the conflicting feelings of the Grinch perfectly.

Elsewhere, Griff Rhys Jones and Matt Terry hold their own as Old Max and Young Max respectively, although the latter has very little to do, spending most of his time following The Grinch around the stage and barking on the odd occasion. Instead, it is Isla Gie who truly steals the show as Cindy Lou Who. For a girl so young, her energy, enthusiasm and stage presence is a joy to watch and her sweet singing voice will melt the hearts of even those with a Grinchy disposition.

Shame then that while the best-known song YOU’RE A MEAN ONE, MR GRINCH goes down well, the rest of the tracks feel like repetitive fillers used to justify the show as a full musical. It is here It is here where THE GRINCH hits a problem. 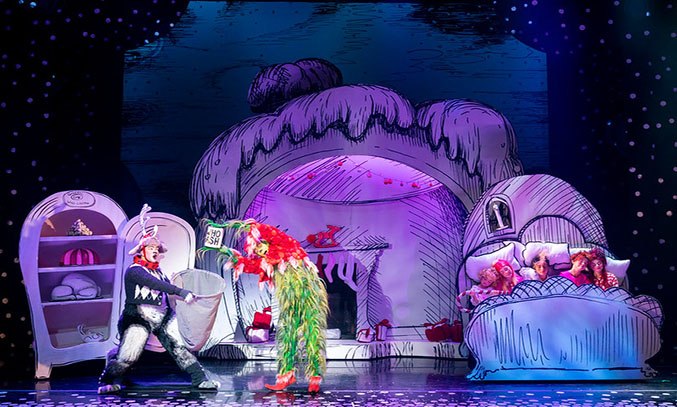 It seems like the show doesn’t really know whether it wants to be a big Broadway musical or a British pantomime, so it fails to do either particularly well. While there is some interaction with the audience, particularly on the Grinch’s part, on the whole, it all feels rather strained and the children don’t really have the chance to get involved in the same way as they would with a panto.

That said, visually this production looks the part and Director Matt August keeps things moving along at a swift pace to make this 1 hour 50 minute show (including a 20 minute interval) short enough to keep the children engaged, yet long enough to feel you’ve got your money’s worth.

If you’re a fan of the original book or the film, HOW THE GRINCH STOLE CHRISTMAS is sure to appeal.

HOW THE GRINCH STOLE CHRISTMAS! runs at The Lowry, Salford until 5 January 2020