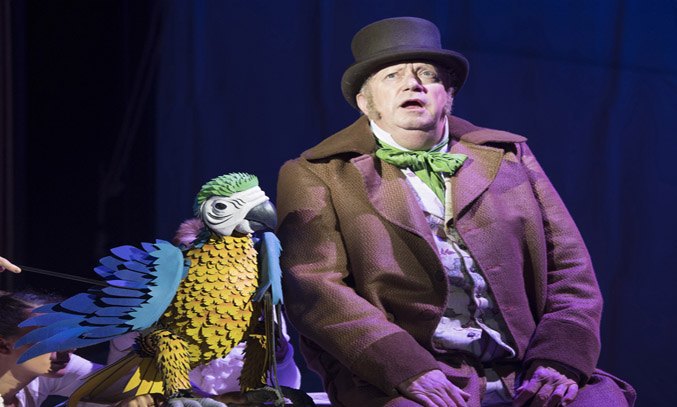 With its visually striking sets and spectacular puppetry, DOCTOR DOLITTLE has plenty of awe-inspiring moments to keep the family entertained

More than 50 years after the release of the hit 1967 film starring Rex Harrison, Samantha Eggar, Anthony Newley and Richard Attenborough, Leslie Bricusse’s acclaimed family musical DOCTOR DOLITTLE returns to the stage in a major new revival opening at Salford’s The Lowry this week.

Based on the children’s stories by Hugh Lofting, DOCTOR DOLITTLE tells the story of a man, who with the help of his trusty sidekick Polynesia the Parrot, learns how to talk to the animals. Receiving a call for help to save the Giant Pink Sea Snail, the larger-than-life Doctor, his human companions and his exotic menagerie of animal friends embark on an extraordinary adventure to the mysterious Sea Star Island, however, when he arrives, all isn’t as it seems.

Those familiar with the original film or the 1998 stage production will no doubt notice a few changes to the recent revival. At the venerable age of 87, Bricusse has spent a year adapting his original to bring it up-to-date for a modern audience. In addition to three new songs, which sit alongside old favourites such as TALK TO THE ANIMALS, I’VE NEVER SEEN ANYTHING LIKE IT and MY FRIEND THE DOCTOR, there’s a bigger emphasis on caring for the safety of animals, as well as a major plot twist with Matthew Muggs now winning the heart of young Emma Fairfax instead of the middle-aged doctor. 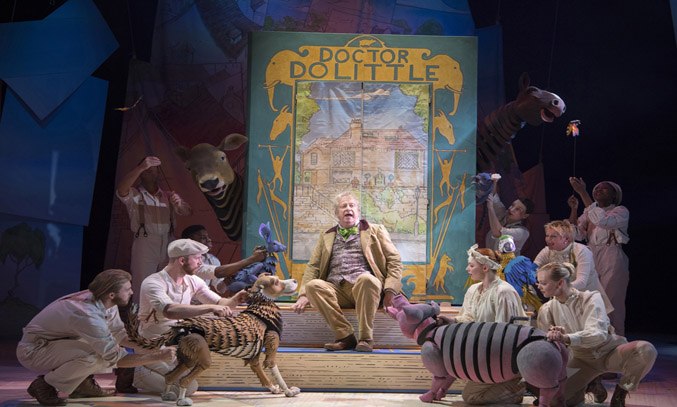 It’s clear from the opening number that the production team behind DOCTOR DOLITTLE have put their heart and soul into making it as visually striking as ever. Tom Piper’s paper-based set design is simply wonderful, the larger-than-life characters leaping straight out of pages from Lofting’s books as they travel across the world searching for the Giant Pink Sea Snail. The attention to detail is excellent here, as oversized books form the base of all the sets including The Flounder – the boat carrying the animal-loving explorers – as well as Dolittle’s home and Blossom’s circus.

Nick Barnes’ puppetry design is equally spectacular, rivalling WAR HORSE and THE LION KING for both its quality and attention to detail. From smaller animals such as dogs, cats, squirrels and birds to the Giant Pink Sea Snail and dancing Pushmi-Pullyu, each puppet is wonderfully brought to life by a myriad of handlers who operate with straight-faced focus while pouring a charismatic and endearing lifelike quality into their characters.

As Dolittle, Mark Williams brings a warm touch to the irritable Doctor who can converse easily with the animals but struggles to communicate with his own kind. While singing isn’t his strong point, Williams carries it off with charm, enthusiasm and likeability.

Elsewhere, Patrick Sullivan is excellent as Matthew Muggs, as is Mollie Melia-Redgrave as his love interest Emma Fairfax, while Vicky Entwistle’s Polynesia is arguably the most entertaining character in the show, carrying the action along with humour and heart. 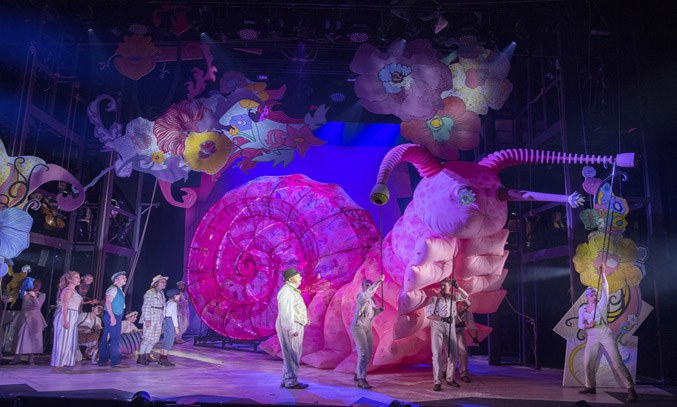 Shame then that the scenes with Brian Capron as Albert Blossom and Adele Anderson as Poison Arrow don’t pull off as well as expected, their musical numbers lacking the power and oomph required to really make this musical stand out.

The same can also be said for the songs, which while likeable enough, are ultimately forgettable. At two hours 30 minutes long (including the interval), the musical could benefit from a little tightening up here and there, perhaps dropping one of two of the ballads which just serve to fill time rather than moving the plot along.

That said, you can’t fault DOCTOR DOLITTLE for its production values, the scene with the Giant Pink Sea Snail and the Giant Lunar Moth, which soars above the audience in the stalls, both standing out as awe-inspiring moments. As Albert Blossom says himself, you’ve never seen anything like it!

DOCTOR DOLITTLE runs at The Lowry, Salford until 5 January 2019