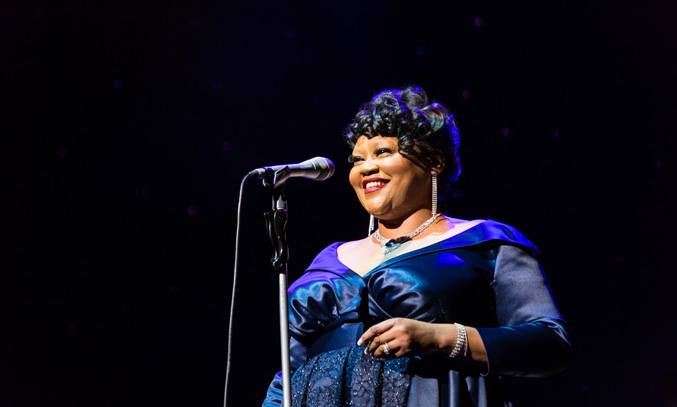 When THE RAT PACK made its West End premiere back in 2003, it took the theatre world by storm. 15 years later, the musical extravaganza is showing no signs of slowing down as THE RAT PACK – LIVE FROM LAS VEGAS heads out on a UK tour.

Based on a concept by Mitch Sebastian, THE RAT PACK LIVE sends you back in time to the glamorous, golden era of 1950s. The show fuses history and legend to recreate a variety show at the Sands Hotel, Las Vegas starring Frank Sinatra, Sammy Davis Jr and Dean Martin. The popular show has also been given a new twist with Ella Fitzgerald joining the trio to perform hits like Night and Day, as well as duets such as Lady is a Tramp and S’Wonderful.

Ahead of its run at Manchester’s Opera House, Nicola Emmanuelle chats about taking on the iconic role of Ella Fitzgerald in THE RAT PACK – LIVE FROM LAS VEGAS and why this particular era of music continues to captivate audiences.

How is it taking on the mantel of such a revered performer as Ella?

I’ve always sung these songs so it’s not daunting for me. I’ve got my own band and have been singing since I was a kid so it just feels natural, plus people have always said I sound like Ella.

What do you feel made her one of the all-time greats?

It’s the way they sang in those days, not just Ella but a lot of other great singers. It’s something I picked up on when I was really small, with parents who are also musicians. I prefer the way people in a bygone age sang – just the way they, say, tailored the end of a note. People like Ella and Patti Page and June Christy and Judy Garland. The way they sang sounded better to me so I was singing like that from a young. It’s funny, when I was at school people would go “Why are you singing all those songs and singing them in that way?’ I just always did and now it’s like breathing to me. As for Ella, it’s the way she brought the songs across. A lot of people sang the same songs but her rendition of them is the quintessential one. Her Gershwin and Cole Porter songbook albums were so brilliant that Irving Berling’s own children asked him “When are you going to get Ella to sing your songbook, Dad?” which she did in the end. Her voice didn’t have a race, it just had a sound that whoever you were – from super-rich to really, really poor – resonated. You’d hear her sing and go “This is the perfect version”. She had a voice and an innocence.

From researching the show, what have you most been surprised or intrigued to learn about her?

I knew she had a hard life, but one of the things I didn’t know – and which really amazed me – was that when she won a competition at the Apollo in Harlem they said she was hideously ugly and they didn’t want her in the band. I’ve always wondered if there was also a rivalry between her and Billie Holiday. There must have been, although Billie Holiday’s take on songs was always painful and quite depressing, if you ask me, while Ella seemed to rise above all that.

What do you most have in common with her? And what are the big differences?

I’m always amazed by how people say I’m just like her. The greatest compliments of all are when people who actually worked with Ella say that. I’ve had a happier life, of course, but I’d love to have the success she had in that style of music because jazz is something I’ve always done. 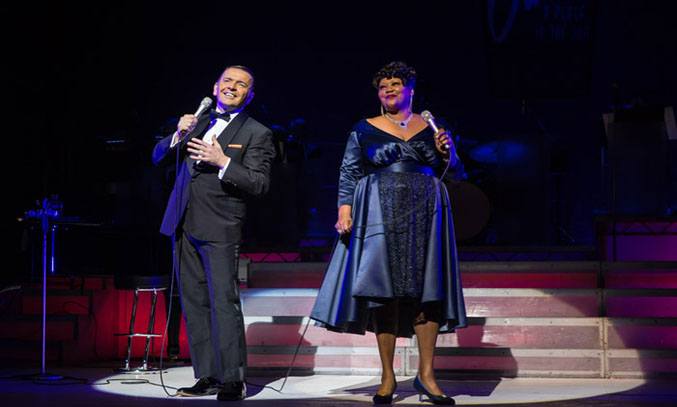 Do you think you’d have enjoyed being a performer in the Rat Pack era?

Yes, I do. I love vintage fashion and I’d love to have been around at that time because they seemed to have so much damn fun. Frank and Ella never actually performed together in Vegas but they did TV shows together and were on the same label. It’s interesting how Sinatra was friends with Ella and Sammy Davis Jr and because he was so revered he could go “These are my friends, take it or leave it”. To us it’s just normal but back then it was really progressive.

Do you have a favourite number in the show and why?

We chose Night And Day because it’s such a big number and I love how it starts with the drums coming in, but I love them all – not just Ella’s numbers but Frank’s, Dean’s and Sammy’s too.

Is the scat singing a challenge for you?

It’s actually really easy for me. I suppose it’s a bit like when you’re singing soul music and you ad lib or if you’re rapping – I don’t have a fear of it and as long as you know where you are in the song it doesn’t matter where you go with it.

Does it surprise you how enthusiastic audiences for the show are?

No because it was such a great era, such a wonderful era, and there’s a lot of nostalgia out there for it. But by the same token we see younger people in the audience and they love it just as much. It was such a great show that the Rat Pack used to put on and so much fun – with all the camaraderie, the jokes and the falling around.

What are you most looking forward to about taking the show on the road?

It’s gonna be wicked, with some big auditoriums and big audiences. When we do the show, especially on a Saturday when everyone’s out for a good time, we get such a lively reaction. Sometimes they’re heckling, which is fun to play off and something that would have happened when the guys did Vegas.

What’s the one thing you have to have in your dressing room and what are your post-show rituals?

I don’t have any diva demands, sorry! After a show I go home or, if we’re on tour, I go back to the hotel and watch shows about serial killers. I’m obsessed with anything to do with real crime. I don’t know why but I’m fascinated by it. If I wasn’t a singer I think I’d want to be a criminologist.

THE RAT PACK – LIVE FROM LAS VEGAS runs at the Opera House, Manchester until 24 February 2018