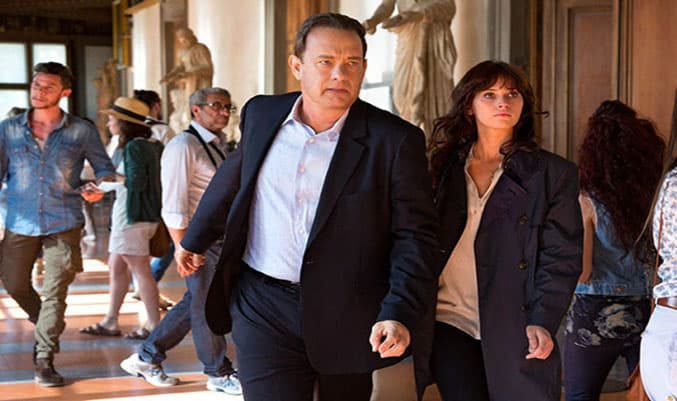 Scrappy and jumbled, INFERNO fails to play to its own strengths

As a fan of Dan Brown’s novels and a sucker for any movie filmed in Venice, I’ve been waiting with baited breath for INFERNO to hit the big screen. Shame then that Ron Howard’s third and (possibly) final film in the Robert Langdon series turns out to be a bit of a jumbled mess.

For those who haven’t read Brown’s book, INFERNO follows Professor Robert Langdon as he embarks on a race against time to decipher a new trail of clues tied to the great Dante himself. After waking up in an Italian hospital with amnesia, Langdon is forced to team up with Dr. Sienna Brooks (Felicity Jones) in an attempt to recover his memories but the pair soon find themselves embroiled in a race against time to stop tech genius Bertrand Zobrist (Ben Foster) from unleashing a global virus that will wipe out half of the world’s population.

Unlike the other films which see Langdon attempt to solve a series of art and religious puzzles, in INFERNO it’s actually Langdon himself who is the puzzle. Suffering from “mild retrograde amnesia”, the super symbologist must try to regain his memory in order to figure out who is chasing him and why and whether he himself could actually be a carrier for the deadly virus. This ensures a breathless first hour as the pair race across Europe in an attempt to save the world, but it isn’t long before the narrative soon turns into a scrappy series of reversals, flashbacks and contradictory information.

The main issue with INFERNO is that it fails to play to its own strengths, notably its award-winning cast. Tom Hanks puts in a decent performance as Langdon but the characters around him are poorly used – Omar Sy and Irrfan Khan in particular – who merely act as perfunctory plot puppets to prolong the pace of the piece. Even Langdon’s fellow partner in crime, Felicity Jones, is underused, her character seemingly all too willing to go along with the events.

I was also disappointed with the ending of the film which is significantly different to the book. Instead of making the most of the unusual twist, screenwriter David Koepp opts for the typical Hollywood resolution, resulting in a feeling of feeling of missed opportunity and nagging frustration.

That said, INFERNO isn’t all bad. The first 15 minutes in which Langdon suffers violent hallucinations of medieval horror are pretty impressive and for the most part, Howard makes good use of the stunning locations in Florence, Venice and Istanbul.

In terms of the trilogy, INFERNO sits in between the rather dull THE DA VINCI CODE and the intellectual ANGELS AND DEMONS. It isn’t a terrible thriller but it’s not terribly ambitious either.

INFERNO is released in the UK cinemas from 14 October.