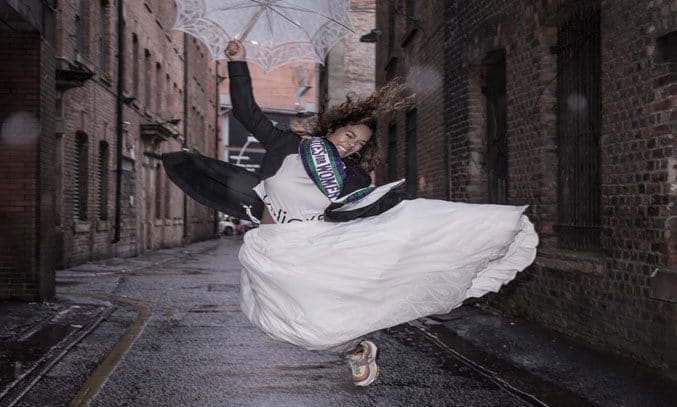 Bold, brave and anarchic, SHE BANGS THE DRUMS is provocative piece which explores Manchester’s rich and radical past as a centre of protest

Manchester is known for many things – music, football and modern computer science to name but a few – but this behind great city is also a rich history of protest, something which Contact Young Company hope to highlight in their new theatre piece SHE BANGS THE DRUMS.

Devised following extensive research at the People’s History Museum, SHE BANGS THE DRUMS is provocative piece of contemporary theatre which explores Manchester’s rich and radical past as a centre of protest. Combining live music with dance, visual art, poetry and performance, this innovative 80-minute piece celebrates the 100 year anniversary of the 1918 Representation of the People Act which saw the right to vote extended to all men over the age of 21 and women over 30.

It’s clear upon entering the iconic 1830 Warehouse that this is a strong and anarchic piece. Banners, posters and visual art pieces from the Suffragettes to the Chartists line the brick walls, as music from artists like X-Ray Spex blast through the speakers as the audience take to their seats.

Here, Contact Young Company use comedy, politics and music to explore Manchester’s ongoing relationship with political protest. As expected, plenty of familiar voices feature in the piece including Moss Side-born Emmeline Pankhurst, the mother of the Suffragette movement. The piece also seeks out lesser-known figures like Princess Sophia Duleep Singh, Annie Kenney and Lady Constance Lytton who represent some of the more diverse, radical and intersectional figures of the era.

What works particularly well in SHE BANGS THE DRUMS is the way in which Contact Young Company, guided by Louise Mothersole and Rebecca Biscuit of Sh!T Theatre, use the piece to not only reflect on history but also look at possibilities for the future. The pounding of the Suffragette march is compared to the pounding of Mancunians hearts following the Manchester Arena bombing. The MeToo campaign also features significantly, with performers stepping up to the mic to share stories of sexual assault and sexual discrimination.

The highlight of the show is an acapella mash-up of contemporary songs with a distinctive sexist tone as patronising magazine, newspaper and billboard ads are projected onto the brick wall. A section in which young actor Ruby O’Casey shares her personal connection to the project, as the ancestor of Hanna Sheehy Skeffington, a leading figure in the Irish suffragette movement, is also particularly powerful.

Yet while it is clear to see why Contact Young Company have chosen to perform this piece in the historic Museum of Science and Industry, the intimate setting of the 1830 Warehouse makes it difficult to see some of the visual art pieces, particularly the video projections and the live band occasionally drown out the unmic’d performers.

That said, this is a rich and radical piece which successfully captures the revolutionary spirit of these brave women and men who not only broke convention but also windows, property and the law for our right to vote. More importantly, it leaves with a powerful message about the future and how it is our responsibility to strive for equality, not just in Britain, but across the world.

SHE BANGS THE DRUMS runs at 1830 Warehouse until 11 March as part of the city’s Wonder Women 2018 radical feminist festival. Tickets are priced from £13/£7 with concessions available. Please note this show is for over 14s.