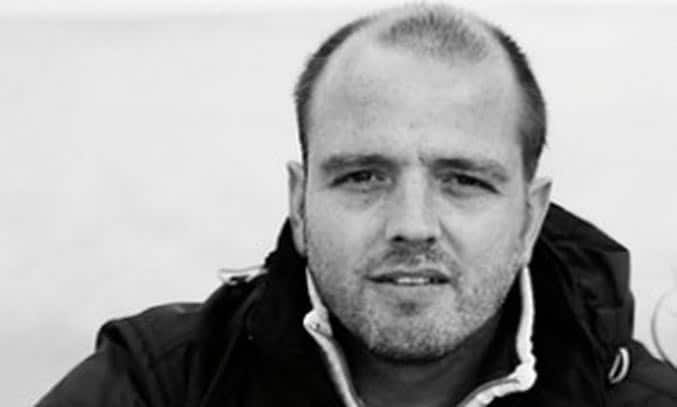 Younger readers may not recongise Gary Numan by name but you’ll certainly know his music. The Godfather of electro pop, best known for his hits ARE ‘FRIENDS’ ELECTRIC? and CARS, is considered a pioneer in electronic pop music, influencing musicians like bands like Dave Grohl (of Foo Fighters and Nirvana) and Marilyn Manson as well as rock band Nine Inch Nails.

Director Steve Read admits that he knew little of Gary Numan before he went to see him perform at a music festival back in 2012. Like many music fans, the former Select and Loaded magazine art director only knew of Numan’s early hits but was quickly blown away by Gary’s set and energy on stage. Little did he realise that a chance meeting with Numan backstage later that same day would lead to a project that took over his life for the next four years.

“It was all a bit of a happy accident really, I wasn’t intending to make this film” explains Read, in an exclusive interview with Donna Kelly.

“I just happened to go and see him [Gary Numan] at a festival called The Hot Farm and I thought I’d go and check him out.”

“I happened to bump into him later backstage. I was thinking of another subject to tackle for my next film and having spoken to Gary for just a few minutes really, it just hit me that he would make a brilliant documentary. I just blurted out, “I want to make a film about you Gary” – it kind of came out of no-where… then I ran off into the night”.

Despite his swift exit, Read agreed to meet Numan and his manager Ade a week later and after a bit of research, realised he had something special.

“There were a lot of different things that seemed like it had a lot of layers to it and realised that it could be a really strong documentary. So I rang him [Gary Numan] up and we got chatting again and we agreed to meet up so I went over to his house in East Sussex and just started filming. Much of that stuff is in the first part of the film.”

That film is GARY NUMAN: ANDROID IN LA LA LAND, a new feature length documentary which tells the story of Numan’s fascinating career and his quest to rediscover his love for music after six long years of struggle. Read and fellow director/producer Rob Alexander spent more than two years following Gary and his family, accompanying him at gigs, in the studio and even on a family holiday on a road trip around America.

“It [the film] grew around us” explains Steve.

“It starts off like a fairly conventional rock-doc but develops into something much deeper and more multi-layered and funnier than a conventional rock-doc. I like to call it a part rock-doc, part love story, part road trip and part therapy session – it’s got all those things to it.”

“It certainly took over my head, there’s no doubt about that. I was having Gary Numan dreams every night, that’s no joke. I was dreaming about Gary Numan every single night, different scenarios where one night we’re at a gig and the next night we were at a Formula 1 race. It does take over your head but it was worth it I think.”

ANDROID IN LA LA LAND follows Numan as he, his wife Gemma and his daughters Raven, Persia and Echo embark on a new life in California. The intimate documentary looks back at his early career, as well as battle with anxiety and depression which eventually lead to his slow disappearance from the public eye.

“The shape of the film is kind of determined much by what we had to work with” explains Read.

“We didn’t have a sh*t load of money to be spending on archive but what we did have was loads of great access so it’s very much an observational documentary. So it kind of evolved into this very intimate and very open and candid portrait of Gary and his family.”

Numan is certainly candid in his interviews. The 55-year-old opens up about his crippling battle with depression and panic attacks, which resulted in a six-year isolation from the music industry in an attempt to escape it all. The film captures a raw and honest side to man usually perceived as being cold, detached and android-like.

“For some reason we had a huge amount of trust. To make a good documentary, it’s about trust and access. The more trust you get the more access you get and we certainly had a lot of trust fairly early on” comments Read.

“I think it’s also partly because he [Gary Numan] really wanted to get his story out. It was beneficial to Gary, to his legacy and his family to have the story told.”

“It’s really, really unguarded and that’s clearly the biggest strength of the film. It’s really honest and it’s a really good insight into what it’s like to go through depression. The midlife crisis is quite often seen as a bit of a joke but it clearly isn’t. It’s very much the opposite of that and in Gary’s eyes, you’re really getting a front seat into how a guy goes through that stuff.”

The film also focuses on the making of Numan’s 2013 album SPLINTER, his first LP in seven years, offering a unique insight into Numan’s song-writing process.

“He showed us through that whole process which is a hugely eye-opening scene in the film” explains Read.

“He goes through his song-writing process which no-one has ever seen before. He writes it a bit like morse code. It’s the way a computer would calculate or construct a song, but then he has these very personal lyrics which he puts over the top of it.”

“It reminded me of when I watched CRACKED ACTOR, the David Bowie film, when he’s on the floor of a hotel room and he’s using cut ups to construct his songs. He would cut up bits of paperwork and throw them on the ground and put them into some kind of order. When I saw that, it was a real eye-opener and really interesting. It was a very unique way of writing songs and a very revealing scene.”

Read is quick to point out however that you don’t need to be a die-hard Gary Numan fan to enjoy the film.

“There’s some good laughs in it, there’s some great music in it but there’s also heavier themes like depression and anxiety attacks.”

“That’s one thing I’m really proud of – that we’ve got someone of Gary’s stature to talk about this stuff. Men find it really difficult to talk about depression and even Gary found it difficult. He was just getting his head around it at the same time we were filming him.”