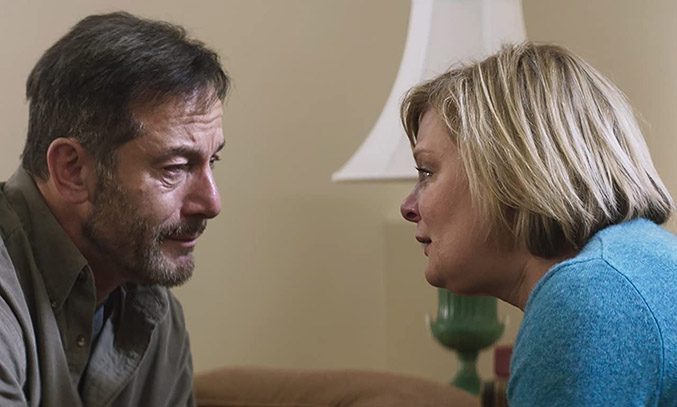 In his directorial debut, Fran Kranz’s opts for a theatrical approach with his new film MASS, a boilerplate chamber drama held together by its incredible performances.

The parents of two boys involved in a school shooting strive for closure in Fran Kranz’s riveting directorial debut, MASS.

Set six years after a fictional school shooting that took 11 lives, the victim’s parents, Jay (Jason Isaacs) and Gail (Martha Plimpton) reach out to the parents of the shooter, Linda (Ann Dowd) and Richard (Reed Birney), to try and make sense of what happened and finally move on from their grief.

Playing out in a single room located in the basement of a church, MASS is a boilerplate chamber drama held together by its incredible performances.

In his directorial debut, Kranz’s opts for a theatrical approach, highlighting the claustrophobic nature of the piece, tightening our view as the characters’ get close to reaching some form of a resolution.

Ryan Jackson-Healy’s cinematography, jittery close-ups and tight, narrow shots give the film a naturalistic feel, the camera staying at the table, even when characters move around the room. The result is a fly-on-the-wall feel, the audience feeling like they are looking in at something we’re not supposed to.

Using his background as an actor, Franz’s original script manoeuvres around the central issue, smartly sidestepping the politics of gun violence in favour of a more nuanced exploration of blame, guilt and forgiveness.

The adept screenplay allows each actor to explore the depths of their character, the thoughtful dialogue, and well-constructed exchanges anchored by a quartet of magnificent performances.

Dressed in a suit and tie, Reed Birney’s portrayal of Richard matches his formal attire, his heavily guarded defences making for an extreme contrast to his wife, Linda, brought to life by the incredible Ann Dowd.

Dowd brings a sensitivity to her portrayal of a mother daring to still love her son, despite his crime, and the tough truths of how well she knew him.

Martha Plimpton stands out for her exceptional performance as Gail. Sat simmering in her chair, Plimpton goes through all the emotions, her restrained anger softening into vulnerability as the chinks in her long-worn grief armour begin to show.

But it is Jason Isaacs who makes the biggest leap from his usual villainous roles as a father broken by grief. His character initially looks like he’s come to terms with everything, but by the end of the film, there’s a well of sadness inside of him that is emotionally crushing to watch.

Yet, while MASS is a raw and unflinching look at the all-consuming nature of grief, it is also melodramatic at points. The characters’ reminiscences are increasingly tinged with the sentimentality that Franz tried to avoid early on.

As expected, MASS is also an exhausting and harrowing watch. At almost two hours long, the film saves most of its personal, soul-bearing moments for the very end, but as such, it feels like it’s stretching itself.

As such, MASS would benefit from a tighter runtime, the deliberate pacing lingering for a little too long, as the four tiptoe around one other verbally, trading pleasantries and small talk.

That said, while MASS is a difficult movie to sit through, it is very much worth the journey. There are no easy answers here, but this is also a story about the power of forgiveness, hope, and empathy. The result is devastating.

MASS screens at the BFI London Film Festival on 11 October 2021.